I travelled to Siem Reap from Phnom Penh by minibus. After 6 hours we were finally there and people leapt from the bus door like newborns. Here I was in Siem Reap to photograph one of the manmade wonders of the world – the temples of Angkor.

I sat and waited for ages for somebody to appear in this doorway, finally these two children popped up and I had time to fire a couple of frames, the scene needed figures to add scale. 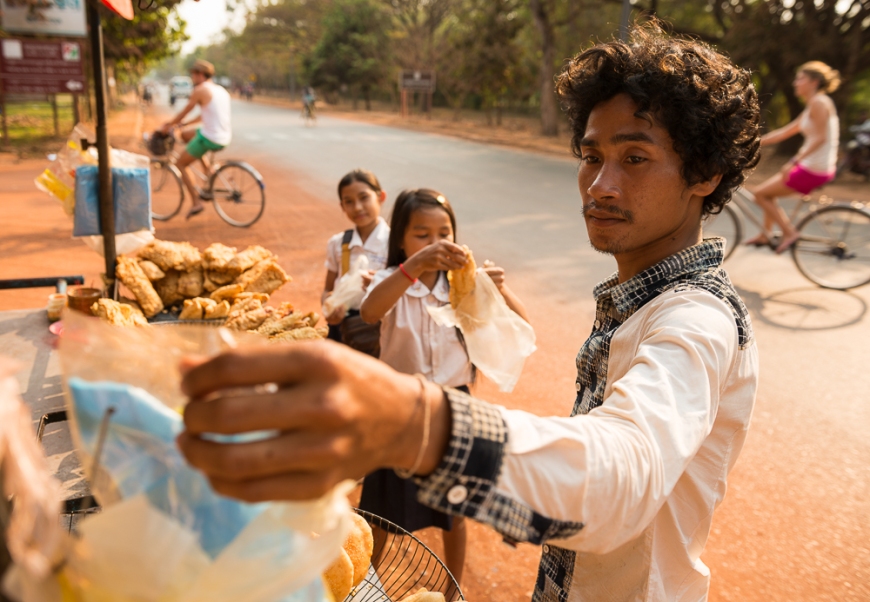 I was cycling to the temples and stopped at this stand on the main road, as I was composing a photograph of the food these children approached to buy something and I quickly repositioned myself and closed the aperture down a stop (for a tad more depth of field) as the shopkeeper reached for a bag.

Everywhere in Asia you see a lot more two wheeled transport on the road than Europe, I liked the late afternoon warm sunlight falling on this stretch of road, so stopped and sat by the side of it and photographed whatever came past (of interest), the eye contact from the nearest Cambodian man made this one work. (1/50th at F/9)

The iconic sight – The silhouette of Angkor Wat before the sunrise, as seen on a million postcards. I know its been done before but when you’re there its hard to resist this one. When I got there the afternoon before to look around I was disappointed to find the main front facade covered in scaffolding, it was too much to consider retouching out so I deliberately underexposed the shots at dawn and left the shadows very dark in post production. Rennovation work can be a bugbear for a travel photographer on both ancient as well as modern pieces of architecture! I used a 6 stop Neutral density filter to prolong the shutter speed and soften the foreground water on all of the Angkor Wat dawn photographs. 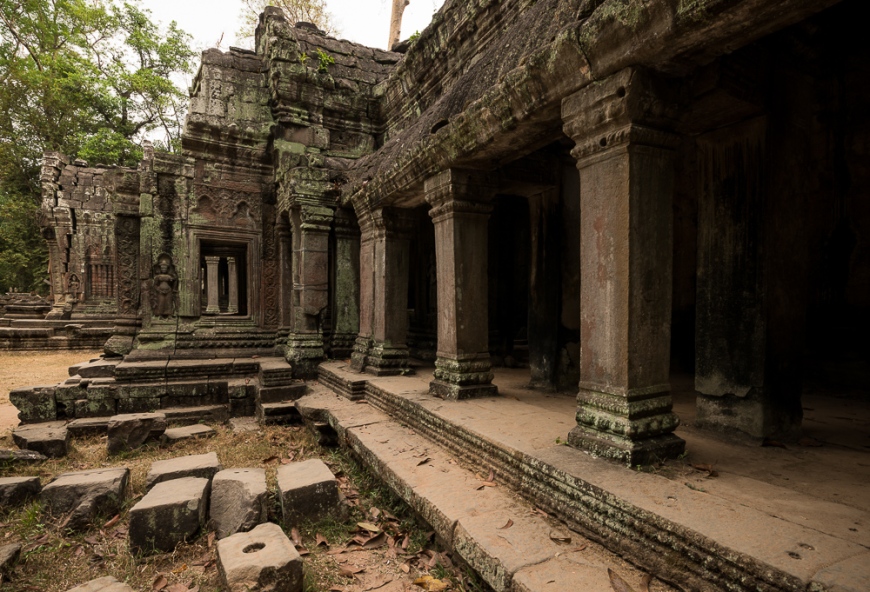 The temple of Ta Prohm, I stayed for a week in Siem Reap to give myself a chance to see and photograph Angkor and the surrounding area in detail. I found early mornings the best time to have the sites to myself, many people watch the sunrise at Angkor then either go for breakfast or check out the angkor interior before retiring to back to their hotel, a lot of tour buses start pulling up around 9am and its super busy for the rest of the day. I used a very useful and informative guidebook  called: Focusing on the Angkor Temples: The Guide Book by Michel Petrotchenko.

Ta Prohm is famous for these trees, whose roots seem to have grown over and under the temples structure, it was used in the first Tomb Raider movie with Angelina Jolie. Being one of the most popular sites I found it hard to get a clear shot without tourists, this was shot shortly after sunrise, 7:45am. I blended two exposures together in Photoshop to manage the brightness of the sky with the lower, shadowy half, then a load of Korean tourists poured in. 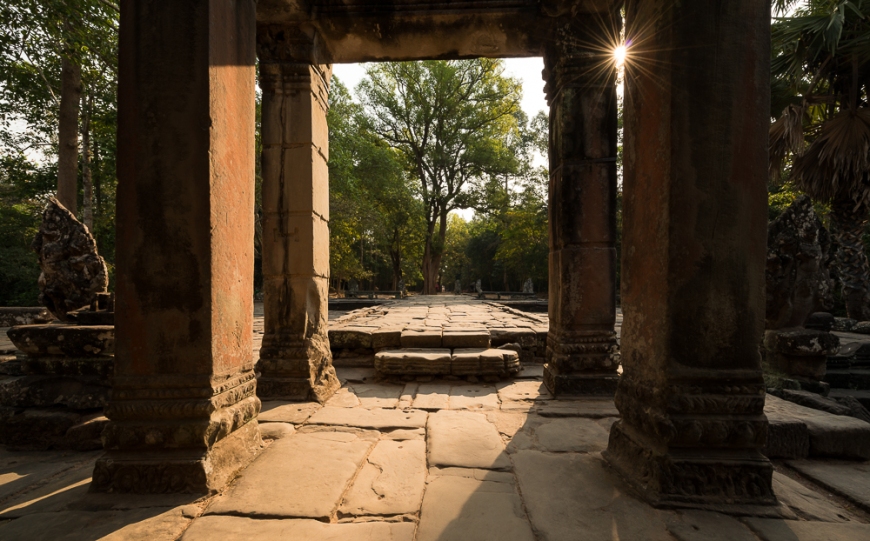 Shooting into the direct sun was a feature of this trip, pushing the newly acquired d800e to its limits. With the aperture stopped down (F/11) I could get the ‘starry’ affect from the sun, because this was a case of tiny movements to be in the right spot it was easier to shoot handheld than on a tripod.

The Bayon Temple was one of my favourites, I just wish I’d had better light when I was there – so much of the time it was this hazy, soft light that is typical of south east asia in February and March, I’ll have to come back in the winter.. 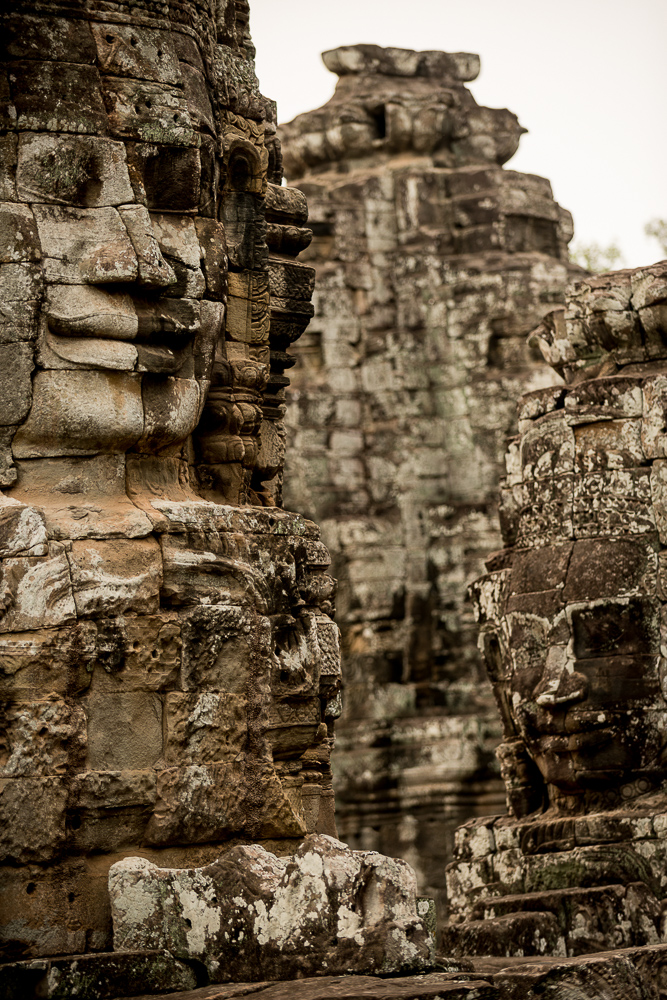 I returned to Angkor Wat to shoot it a second morning, as I felt there was potential for a better shot, (and I’d been there too late to get a good spot – about a hundred people were there before me at 5:30am the first time!) Similar setup again, i was using a Giottos Carbon Fibre tripod (courtesy of David Noton), the Nikon D800E with 24-70mm lens and 6 stop Neutral Density filter. When using such a filter I use live view mode to compose and focus the shot, it does eat up the batteries though so I try to turn it off whenever its not in use. 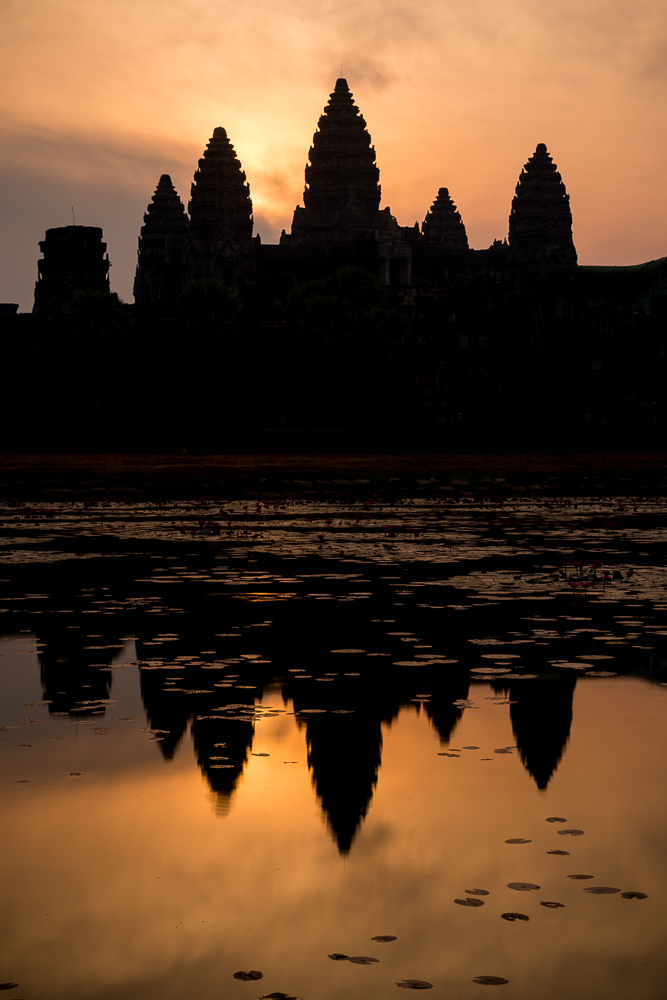 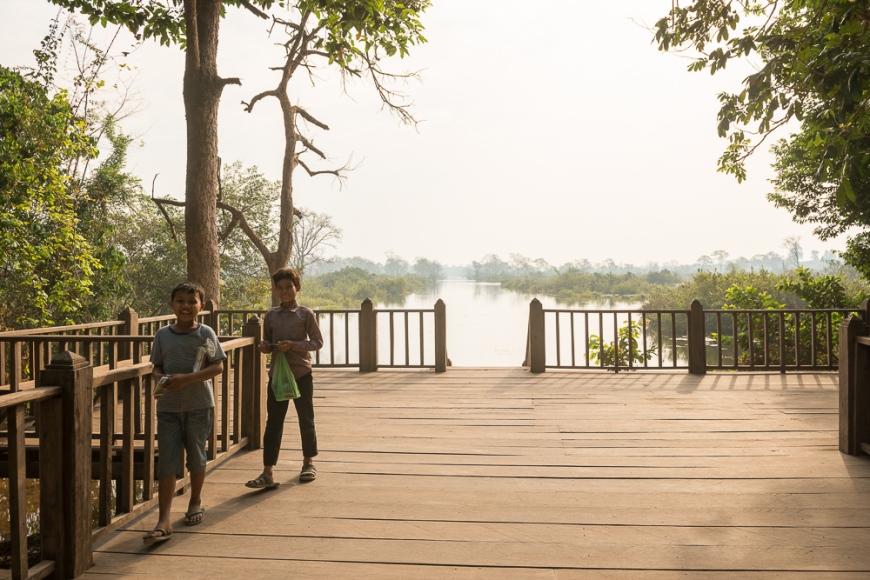 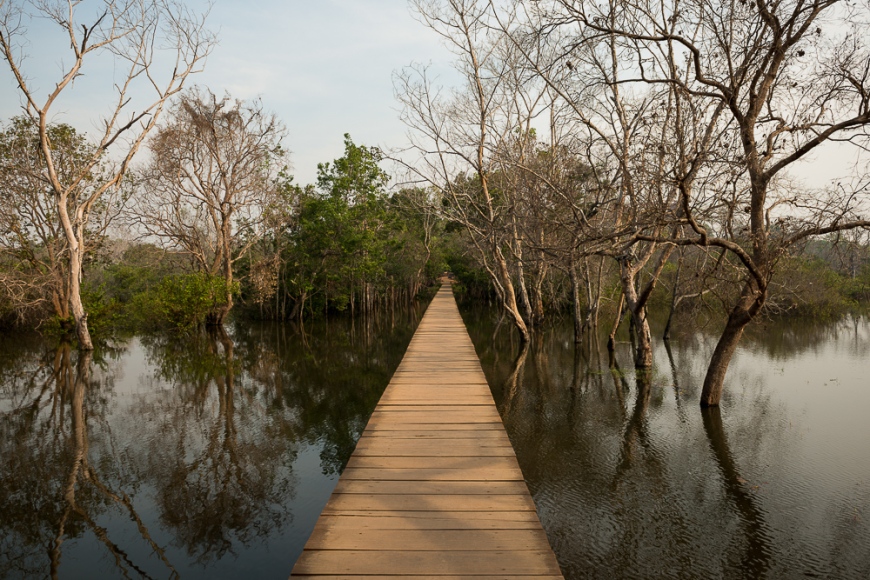