From Laos we headed south across the mountains, en route to Ko Samui, for one night in Bangkok. A city I’d been to a previous occasions, but had never managed to get much photographic return from this South east Asian metropolis.

(Shot through the hotel window)

This is the view from LeBua (Skybar) made famous by ‘The Hangover 2’ movie. It was a typically hazy Bangkok sunset. It looked as though the sun would gradually fade into the clouds so I did the shots early.

View from The Skybar, The Dome at Lebua, Bangkok, Thailand

Shooting handheld (I didn’t bother bringing a tripod as it would almost certainly have been refused entry) as day turned to night I had to raise the ISO, this was shot at 1600 at f3.5 at 1/60th. i used a 14-24mm to show the foreground wall which could act as a lead in line for the composition. 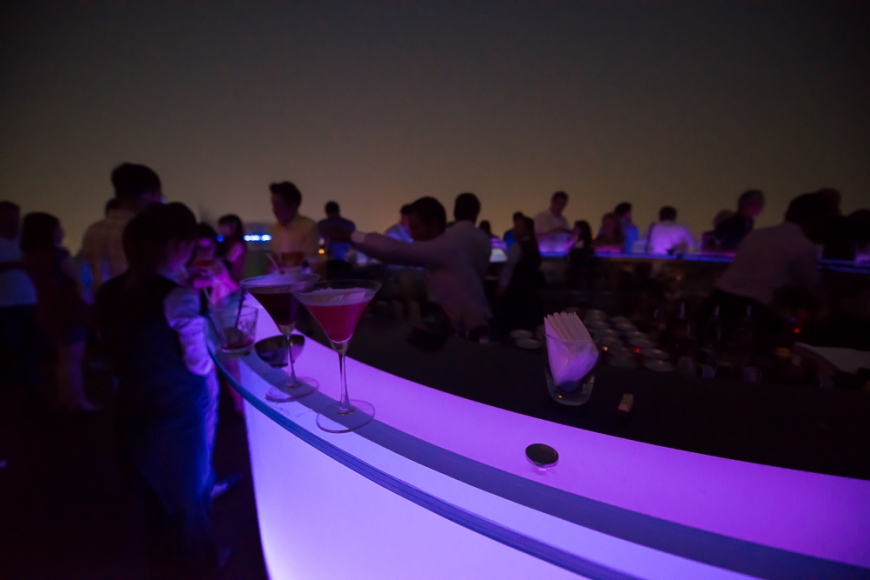 The Skybar, The Dome at Lebua, Bangkok, Thailand 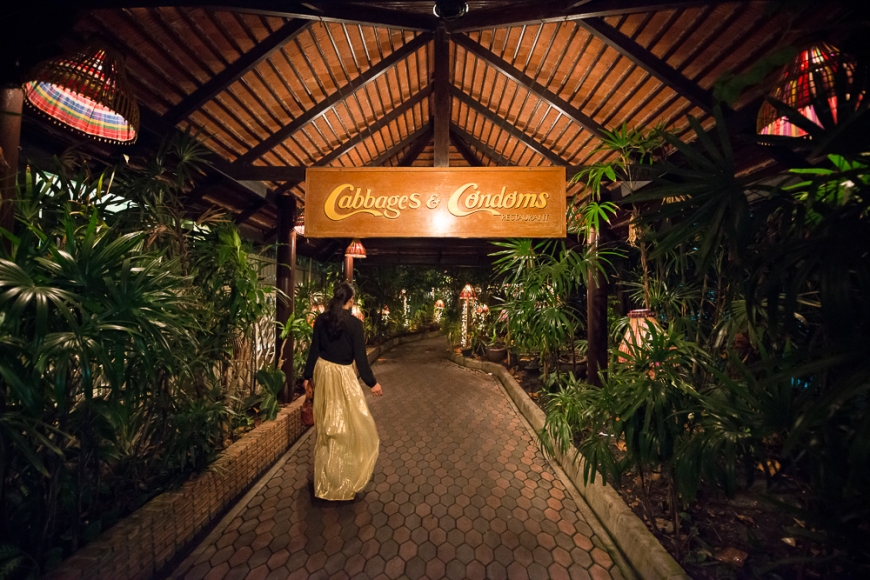 Dinner at ‘Cabbages and Condom’s’ restaurant in central Bangkok, profits raised by this place are put towards local good causes. I like the way the image captured the cool air being fanned in the top right corner. Shot this with the 14-24mm Nikon lens to show as much of the interior as possible and corrected the tungsten white balance in Lightroom in post. 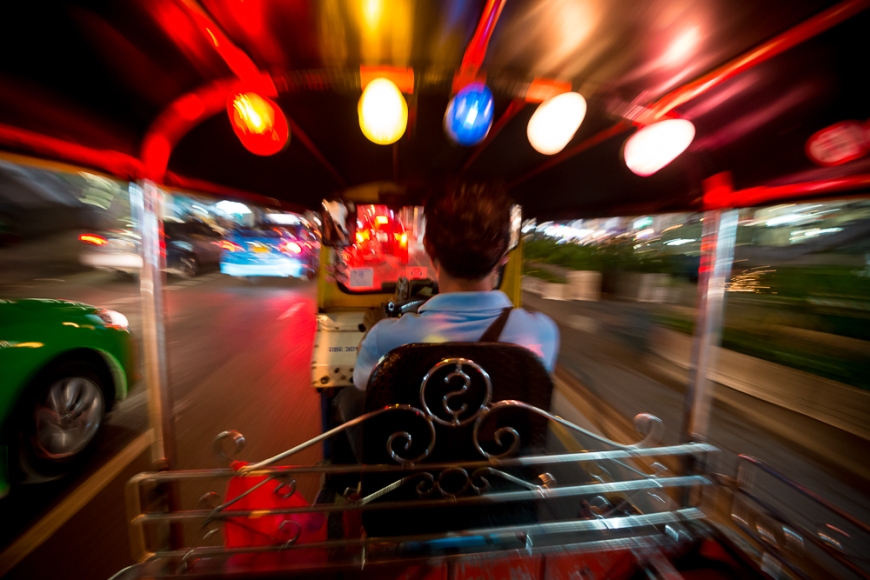 One of my favourite aspects of travel in Asia is the chance to travel in ‘Tuk tuk’s’, something I try to capture with a photograph, with hit and miss results. This was shot with a 14-24mm at 14mm at 1/15th – F4, ISO2000. I zoomed the lens slightly during the exposure which gives the blurred affect to the lights on the tuk tuk ceiling. 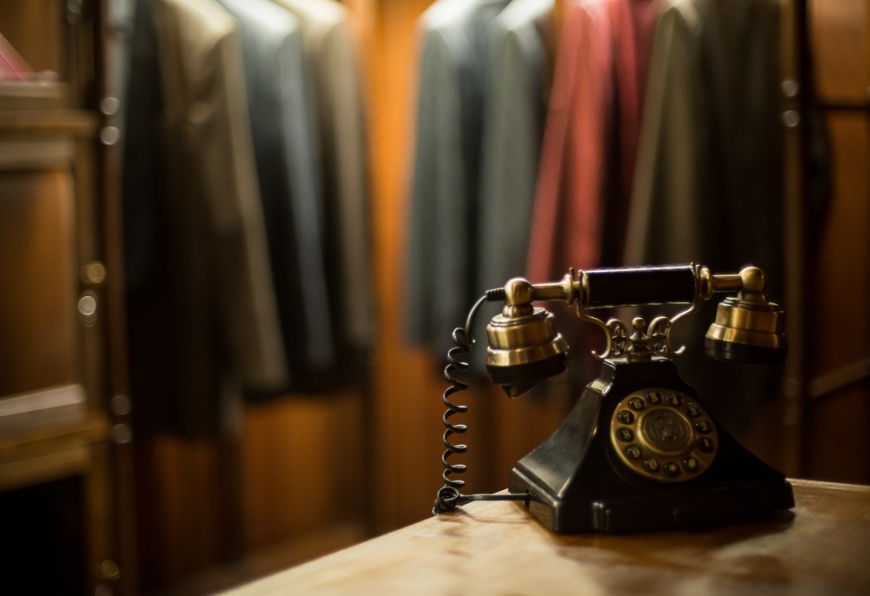 Interior of the ‘Speakeasy’ Bar in the Muse hotel, Bangkok. I was trying to show the distant skyscrapers as well as the bar interior. The couple sharing a table acted as the natural focal point and the shallow depth of field of the Nikon 50mm prime at F1.4 dropped everything out. 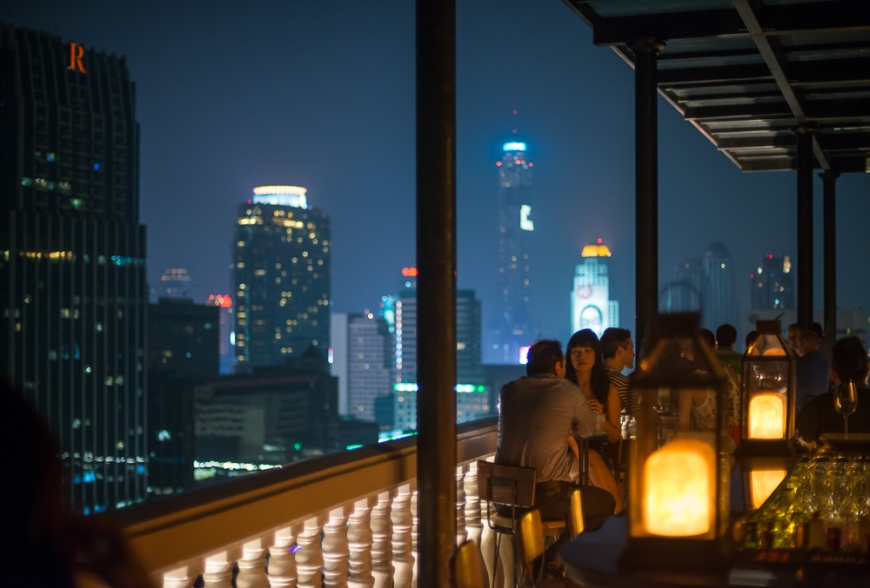 One thought on “One Night in Bangkok”